I LOVE coats! Can you tell? I'm currently making a 60's cape and an Edwardian jacket. I've also got about15 more coats than I posted here. A 1940's varsity jacket, a Victorian cape, an uber modern Japanese coat, 2 brocade 60's dress coats etc... Here are a few!

On the left is my everyday coat. It is black wool and made by Shelli Segal. I found one similar on Macy's website and it is $325! Mine was free! It was given to me by my mum's friend who was moving. I added a hood and a Victorian mourning cameo. I'm wearing it with a silk Alexander McQueen scarf I received for Christmas. On the right is a coat my step-mum sent me last week. She was in Target, took one look at it and thought of me. It has a faux fur collar and sort of a swing fit. On a side note, my mum liked it so much she went and bought one too. Oh boy, twins...

The fur coat on the left is my "Edward Gorey" coat. Thankfully mine is fake! On the right is my silly 1930's hiking ensemble. Everything is scratchy wool that makes me nuts.

The super long military coat is made by J. Crew. I found one like on their site - $398! Mine is from Ross in Los Angeles, marked down several times because no one there has any use for something like this. People always stop and talk to me about it when I wear it. On the right is a silly little wool & sequin cape by Prabal Gurung for Target/Neiman Marcus. I think I could only wear it in the spring/summer around here.
Right now it is 9°F. That's -12°C! (I know this is not at all cold compared to say, Helsinki, but is plenty cold 'round these parts)

On toward my two silliest coats. The red coat is from the 1940's, but I "modified" it to wear to the Vancouver Olympics in 2010. It's all sequins and goofiness. I made the hood from pockets taken out of my mum's red coat. My boots are Rockports from Ronsons, for some reason I HAD to buy them. They're pretty decent rainboots, they make me laugh and they were designed by women's hockey great Cassie Campbell. On the right is my WW2 Ike jacket. It's a dude's jacket, but it has patches (a roaring polar bear) on it from service in Alaska.

My mum bought me this dress and today is my first time wearing it. She thought the peasant top looked German - which would appeal to me! I felt a bit odd as I am not used to wearing a slim skirt, plus I gained 10 pounds this holiday season. It's like there is an airline pillow strapped to my midsection. A pillow made up of heavy cream, chocolate and Bailey's! I've been going for walks and eating more sensibly, so it should just be another month or two of the extra padding!

The tights are from Rue 21. Only $3! I'm wearing them over solid gray tights.  Rue 21 has been in my local mall for years but I never went in. It is so packed in there you can't see anything. Online it was much easier to look around. I know I am LEAST 15 years too old to shop in this store, but I think I can get away wearing these.
Posted by MmePolaire at 2:51 PM 3 comments:

Yeah sweaters! Living in the Pacific Northwest, one does accumulate sweaters. Here are three of my current favrourites. 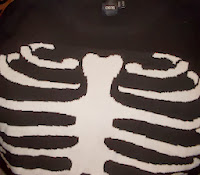 First up is this sweater from ASOS. This just arrived 2 days before Halloween. It has the strangest short, boxy fit. The first larger one I ordered could have fit 2 of me in it. I still love it though, I have several skeleton shirts, but they are all printed and this is woven. 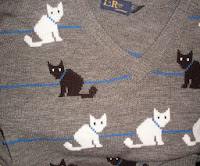 I've had this 80's cat sweater for ages. It is unflattering on me, but I still wear it. To me is says "Let's to to Sears and get our portrait done". 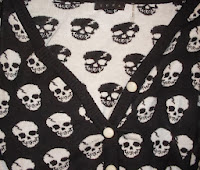 Last is my skull sweater from Modcloth. I try to limit my wearing of it so those around me do not get sick of it. The skirt I'm wearing with it just arrived from Modcloth as well.  Nowhere is the description said it was a knit fabric - and it is super form fitting, even though I went one size up. I think I look like a sausage about to burst, but my boyfriend gave it thumbs up.

Happy Halloween! Hope your Halloween is going great & you're getting lots of candy! I dressed up and brought my pumpkin to work today. I have an appointment later on do to a walk though of a house, I wonder what the lady will think when I walk in...
This is a costume from 3 years ago. I didn't have a plan when I started out. I was always in love with orange and black 1920's ready made costumes like these: 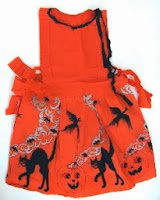 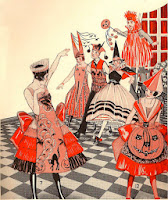 It's cute and it's cheery and I've never seen another like it!

Close up of the painted kitty. It's hard to see, but every dot, stripe and edge of this costume is covered in sequins and beads.
Posted by MmePolaire at 1:21 PM 10 comments:

My grandma passed away last Wednesday night. I got a call at work saying she had 24 hours to live, but she only had 9. It was so sudden. Saturday night we called each other and chatted about the Canucks game like usual. Tuesday night I called her and we argued about where to go for dinner on my birthday. My mum and I rushed up to see her and she was lucid and normal. At 11PM I went home alone to her house and my mum was to stay the night in hospital with her. I woke up in the middle of the night hearing someone call my name from upstairs and I was so scared. Just then my mum called me and said she was in the driveway and would I let her in? I opened the door, look at my mum, aunt and uncle and fainted. What a horrible night. At least she was not in hospital long. My aunt and I had to tear the house apart the next day to find her will and her final wishes. Thank goodness she wrote down what she wanted because we were in to state to decide anything and the funeral home wanted to know immediately what was do be done. Note to self: Pre-plan your own funeral. When my boyfriend and I met, we had 4 grandparents between us and now we have none. I feel so old.

This was taken by Vancouver's Foncie's photos. Probably mid 1940's. 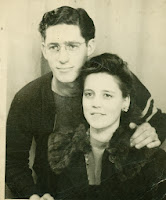 My grandfather and grandmother. Weren't they cute? 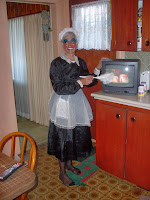 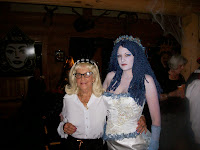 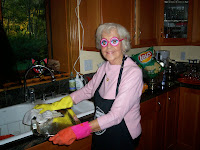 My grandmother's birthday was Halloween and she loved to dress up, wear masks and be goofy. On the left she's wearing a 1940's maid dress with her creepy mask last year. In the middle as a 1950's "girl". 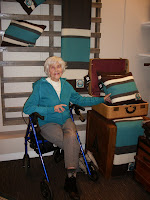 This is the last photo I took of her. She was matching the display of Lake Louise blankets at Hudson's Bay. She said her friends would be so envious because of her jaunt downtown. We went to the Spaghetti Factory, drove over the Burrard Street bridge and tooled around Kits.
Posted by MmePolaire at 3:23 PM 7 comments:

I made this costume several years ago for my mum's Halloween party. My boss gave me a size 26 wedding dress she had, which gave me quite a lot of fabric & lace to cut up and play with. I couldn't bear to paint it, so I painted the shredded lace trim instead. The top is a steel boned corset with little fimo ribs. My veil is a curtain I painted out on the lawn. The wig is the "official" Rubies one & it was a nightmare. I itched all day and night with that damn thing on. 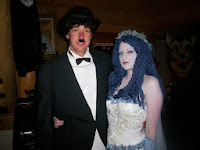 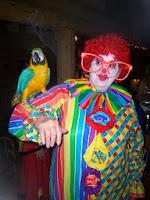 My boyfriend was Charlie Chaplin that year. He said the corpse bride was his favourite costume on me - probably because my cleavage was on view...
My mum was a clown - do you like the big red lips I painted on her?
Posted by MmePolaire at 11:45 AM 6 comments: 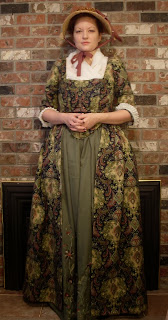 I recently completed this dress - I've been working on it for 3 months or so. It is for my step mother who is a member of the Daughters of the American Revolution. She will be wearing it in a parade and to veteran's events in November. She lives in California, so I only had one opportunity to try a partially made bodice on her in June. Fortunately she and I are of a similar height and size.
I bought the main fabric for $6, the hat trim fabric for $3 and the petticoat fabric for $4 at the Goodwill. The hat was $1, but I uncoiled it and re did it into a flat crown. The corset is made from leftover upholstery fabric from a job I did and the panniers and pantaloons are from free sheets I got at a rummage sale. I know everything is not totally historically accurate - but it's tons better than a ready made costume bought off the net. It is a mix of old and new sewing patterns. The panniers are from Norah Waugh's  Corsets and Crinolines, although much smaller.

I really must thank American Duchess for all the inspiration for this costume. I endlessly poured over the details of her dresses and hats. Especially the idea for the covered buttons up the front, this solved a huge headache for me!

My step mum is not a costume person, so I took a series of photos of the proper order to get dressed.

MmePolaire
I love all aspects of Victorian life, especially mourning. I am not an expert, just a dedicated amateur.